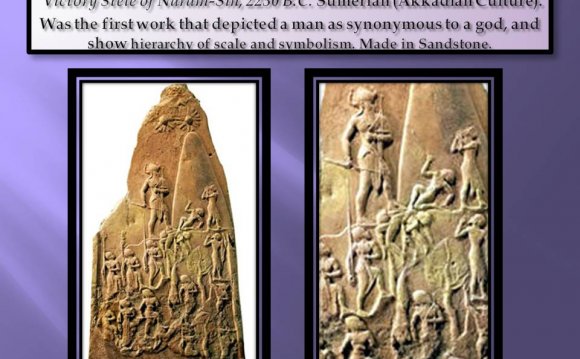 Greater than 4Thousand years back the valleys from the Tigris and Euphrates rivers started to teem with existence-first the Sumerian, then your Babylonian, Assyrian, Chaldean, and Persian empires. Here too excavations have discovered proof of great skill and artistry. Good examples of proper works in marble, diorite, hammered gold, and lapis lazuliahve been found. Stone, wood, and metal was imported. Sumerian art and architecture was ornate and sophisticated - mainly employed for religious reasons - painting and sculpture the primary median used.

Of the numerous portraits created in this region, the best are individuals of Gudea, ruler of Lagash. A few of the portraits have been in marble, others, like the one out of the Louvre in Paris, are decline in grey-black diorite. Dating from about 2400 BC, they've the graceful perfection and idealized options that come with the classical period in Sumerian art.

Clay was the Sumerians' most abundant material. Sumerian techniques and motifs were broadly available due to the invention of cuneiform writing before 3000 B.C. Among other Sumerian arts forms were highly sophisticated clay cylinder closes accustomed to mark documents or property.

The famous votive marble sculptures from Tell Asmar represent tall, bearded figures with huge, looking eyes and lengthy, pleated skirts. The highest figure is all about 30 inches tall. He signifies the god of plant life. The following highest signifies a parent goddess-mother goddesses were common in lots of ancient cultures. These were worshipped with the hope they will bring fertility to ladies and to crops. (Another link with African culture.)

The following biggest figures are priests. The littlest figures are worshippers - an absolute hierarchy of size. It is really an illustration of artistic iconography. We learn how to read picture symbols- - physiques are round and scarcely classified by gender, using their uplifted heads and hands clasped. This can be a pose of supplication-wanting or awaiting something.

Ur produced much outstanding Sumerian work, e.g., a wood harp using the mind of the bull on the top, showing mythological moments in gold and variety inlay around the seem box (c.2650 B.C., Univ. of Penn., Philadelphia).

This technique of writing developed prior to the last centuries from the fourth millennium B.C. within the lower Tigris and Euphrates valley, probably through the Sumerians. The figures contain plans of wedge-like strokes, generally on clay pills. A brief history from the script is strikingly like this from the Egyptian hieroglyphic.

Pretty much all Sumerian sculpture offered as adornment or ritual equipment for that temples. No clearly identifiable cult statues of gods or goddesses have yet been found. Most of the extant figures in stone are votive statues, as shown by the phrases utilized in the inscriptions they frequently bear: "It provides hopes, " or "Statue, tell my king (god)."

The Warka Vase, may be the earliest ritual vase in created stone discovered in ancient Sumer and could be dated to round about 3000 B.C. or most likely fourth-3rd millennium B.C. It shows males entering the existence of his gods, particularly a cult goddess Innin (Inanna), symbolized by two bundles of reeds placed alongside as a symbol of the doorway to some temple. The detailed drawing above is made from tracing an image (from Campbell, Shepsut) from the temple vase available at Uruk/Warka, dating from roughly 3100 BCE. It's more than one meter (over 3 ft) tall. Around the upper tier is really a figure of the nude guy that could possibly represent the sacrificial king. He approaches the robed full Inanna. Inanna wears a horned headdress.

The Full of Paradise stands before two looped temple rods or "asherah, " phallic posts, sacred towards the goddess. Several nude priests bring gifts of baskets of gifts, including, fruits to pay for her homage around the lower tier. This vase has become in the Iraq Museum in Bagdad.